On Thursday, February 27, 2014, we had another club meeting with world-renowned bonsai artist Bill Valavanis. Bill gave us an incredible lecture/demo regarding how to make a proper bonsai forest planting. However, prior to the demo a couple of awards were handed out for the clubs display at this past falls Hershey Gardens Exhibit.

Click on the first image to enlarge and scroll

Susan Thomas was awarded First place for her root over rock Chinese Elm.

Bill Valavanis spectating as the awards are handed out. 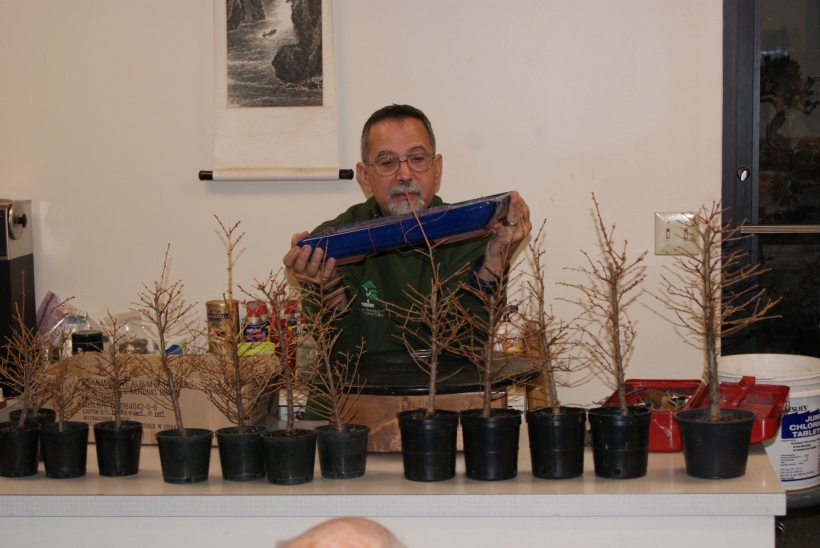 Seasonal and Grass plantings frequently are created for a specific purpose then taken apart. Saikei or tray landscapes are intended to represent a scene in nature and are composed of many different trees as well as natural and/or man-made objects. TheClassical type adheres more closely to the traditional Japanese way of preparing and presenting trees. The Natural style more closely represents how the trees might be viewed in nature.

Going a bit deeper into the forest, Bill explored the Single Root System and Multiple Root System approaches to Forest Bonsai. The single root system involves taking a single tree and laying it down and training at least five branches to grow as individual trees. After preparing the tree, including making some cuts on the trunk, it is placed in a growing box long enough and deep enough to cover the trunk with two inches of growing medium. New roots will start from the cut areas of the trunk in 1-2 years. The Multiple Root System approach, which Bill used for his demonstration, is a forest planting composed of multiple seedlings or cuttings of different trees. Most frequently all the trees are of the same species in a forest planting but variations in color or growth habit across the trees can add an interesting effect.

Bill also distinguished two styles of Single Root Forest Bonsai, the Raft Style and the Sinuous Style. The Raft Style is created from a relatively straight tree and does not have much depth of field since the individual trees will be in a straight line. In contrast,the Sinuous Style is created from a trunk which is not straight or is curved for the forest creation and the finished product will have a more natural feel and more depth of field since the trees will not be in a straight line.

Design Factors to consider when creating a forest Bonsai include Focal Point and Eye Movement – whether the composition “moves” left to right or right to left; Composition and Spacing – plant on irregular lines from front and side views and use of varied spacing between trees; Trunk Thickness and Height – the main tree is highest and thickest and other trees should be irregular in height and smaller in diameter; Trunk Lines — avoid crossing trunks in formal upright plantings; and Silhouette – wide triangular silhouettes create a definitive impression and usually fill most of the container while narrow and one-sided triangle silhouettes create a suggestive impression and usually large areas are left un-planted or filled with flat stones.

Utilization of the design factors creates an Appearance of Forest Bonsai characterized by the following dichotomies: Near (tall trees in front) or Distant Vies (tall and heavier trees in the middle section); Realistic (use of stones, ferns and ground covers) or Idealistic (trunk placement emphasized by the bare essence of composition) feeling; and Definitive (vanishing point defined) or Suggestive (vanishing point created by the imagination) impression.

Bill used 2-3 year old Japanese Larch for his Forest Planting demonstration. The trees were grown in different size containers, causing variation in height and trunk girth. He chose a blue pot to show off the Spring and Fall colors of the Japanese Larch.

For the assembly of Bill’s forest, the largest trees was placed in the pot first on a hill then two supporting trees were chosen and placed with the main tree. This grouping was placed on the left side of the pot, creating a left to right focal point flow from the heavier to the lighter concentration of trees. Bill then positioned an additional ten trees, starting with larger trees and working to the smaller ones. The placement of the trees resulted in an asymmetrical triangular outline.

Bill suggested that if you are having trouble with the trees holding their position, use a heavier soil or put some water on the soil. Tie down the trees and remember to finish tightening the wires by adding a Z-twist to the tie down wires on the underside of the pot. Undesirable unneeded branches are removed, generally cut the heavier ones and leave the lighter branches. Do not soak the pot when you water, rather water the composition from the top and allow water to run through the pot. And, finally, if you are going to wire the trees, do it in the summer and wire all the trees.

Click on the first image to enlarge and scroll

Working on first tree chosen for the middle

Looking at group to decide next placement

We are a premiere bonsai club in south-central Pennsylvania. We strive to bring together bonsai interested people from all over the southern and central Pennsylvania area. If you have an interest in bonsai come join us in sharing the wonder and joy of this ancient art form.

This site uses Akismet to reduce spam. Learn how your comment data is processed.

GO TO MEMBERSHIP PAGE FOR INFO ON JOINING THE CLUB!